Mail us : editor@berkshirewoman.com
Berkshire Woman and Family > Travel > In Search of America, on the (runaway) Mother Road…. 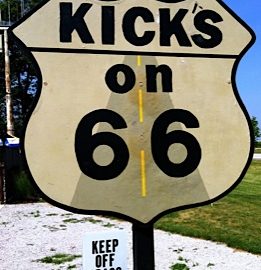 A road trip along Route 66, from Chicago to Los Angeles, inspired by Steinbeck and song has been a dream of mine for as long as I can remember, Iʼm not alone in this. Pixar did it with Cars the movie, Billy Connolly did it on his Trike, Ricky Gervais sent the The Idiot Abroad in a Smart Car. We took a beautiful black convertible Chevrolet Camaro SS by happy mistake, from Hertz, (a courtesy bus ride from OʼHare airport) which turned the 2400 miles of Route 66 into such a joy to drive that we added another 1600 miles on just for fun.

Iʼm a little ashamed to admit to my love of cars and driving, I reduce, re-use and recycle wherever I can but I canʼt pretend this kind of holiday would please an environmentalist, so I promise to negate my carbon footprint with hanging baskets, ok ?

Maybe it balances out, I hadnʼt set foot on a plane since the 9/11 attacks, and for some time I had despised myself for the severe limitations my phobia placed on not just me but also my family. In order to deal with the issue I had put myself on a Fearless Flyers course, the same day terrorists bombed Glasgow airport. Travel and adventure for me were not looking good until one day it dawned on me that my fear was my choice, and therefore I could control it, although I cannot deny that the day before I flew I wrote letters to my family and hid them under a loose floorboard to be read in case of my death.

Finally, with emotional support, and a fair amount of teasing from my family and friends, the Route 66 carrot on a stick and a Diazepam I did it. If you are a fearful flyer, these things helped me ….fly in daylight where possible. Have a glass of water or something stronger in front of you, and if the motion of the plane becomes uncomfortable look at the water.. has it tipped over? No ? Then everything is fine. Look at the faces of the Cabin Crew, are they terrified ? No ? Then everything is fine. Sit in view of the wing, has it fallen off ? No ? Then everything is fine…I thought of the air being a little like water, and the plane a boat upon it, so the bumps were just like the waves. I realised I canʼt always be in control, and I certainly canʼt fly so therefore I had to surrender to trust. I actually found myself enjoying the bumps as we made land over Canada, swooping over a great, shimmering Lake Michigan, landing at 1.30 pm local time, and stepping out into 90 degrees of glorious June sunshine.

The start of route 66

Not being an experienced or even natural traveller I had insisted on pre-booking hotels in the busiest places en-route rather than just going with the journey as my travel partner would have preferred, so first stop The Hilton, South Michigan Avenue, maximum bling, and a lakeview room as a reward for just getting there. Self parking our car at the hotel was a shocking $47.

Never ʻValet Parkʼ anywhere in the US unless you have just won the lottery. Our stomachs said ʻSuppertimeʼ so, duped by the heatwave and oblivious to how cold Chicago can be we headed for the lakeside beaches expecting more cafes and bars than there were, settling on one with a local band playing music as eclectic as the menu and foot-long frozen Margaritas. Foodies try ʻThe Gageʼ for dinner. 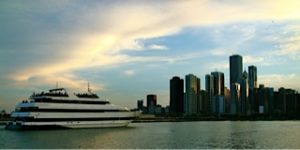 Chicago is quite beautiful, built on a typical grid system itʼs easy to walk from the city to the lakeside. To go further faster you can hire a bicycle at the Navy Pier, the cycle paths are excellent. Not to be missed is Millennium Park for Cloud Gate, the mirrored sculpture by Indian born British artist Anish Kapoor, nicknamed ʻThe Beanʼ, and the Buckingham Fountain light shows which start at dusk and have the city and the lake as alternate backdrops. Back at the Navy Pier a water taxi takes you into the city for the Skydeck on
the 103rd floor of Willis Tower, unless like me you get wobbly legs four rungs up a ladder. 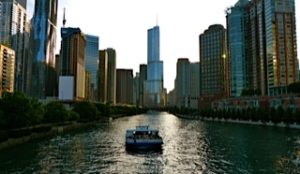 On the way to St Louis….

Having walked Chicago most of the night we were up with the sunrise over the great lake for the 300 mile drive to St Louis. We have three maps but for reasons best known to my travel partner we will not be using a sat nav. We also have a compass, a coffee each, a dark chocolate Snickers and a packet of Trailmix. Already 85 degrees at 7am outside and the roof is down so I can snap pictures of the “Route 66 Begin” sign on Adams Street. 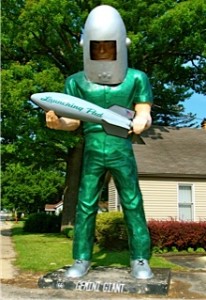 It was our intention to cover every traversable inch of Route 66, this meant we occasionally drove 100 miles to a dead end, more than once followed 66 signs in the wrong direction, and even ended up on the railway tracks unexpectedly, itʼs all part of the journey. Much of 66 runs parallel to both the railroad and the freeway and sometimes there is no choice but to get on and off the highway. This can be a hairy experience as some slip roads continue a little and some just dump you suddenly into fast moving traffic. The route west out of Chicago was built over the old road. We pass through quiet towns called Indian Head Park, Romeoville, next to Joliet with its “Do Not Pick Up Hitchikers” signs, Wilmington which has the 28ft green Gemini Giant spaceman, Braidwood and the 50ʻs Polka Dot Drive In, Pontiac and Normal. Route 66 is a museum in itʼs own right, but more worryingly most of the diners or cafes we had hoped to stop at on our journey appeared to be closed. I donʼt know if we were just too early or too late, but the many shuttered small businesses we passed clearly show America is struggling. Please support the often family owned and run cafes, diners and tourist orientated gift shops along Route 66 wherever you can, but pack a small picnic the night before, just in case. 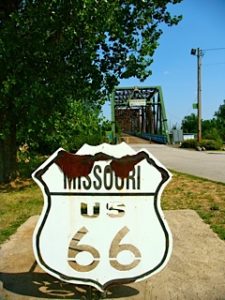 A breezy stroll across the old Chain Of Rocks Bridge over the Mississippi and you are in Missouri. The Delmar Loop, 15 minutes out of St Louis city centre, has a village feel and a walk of fame honouring those who were born or lived in St Louis and made a significant contribution to US culture. Read plaques detailing the lives and achievements of Miles Davis, Tina Turner, Scott Joplin, Tennessee Williams, Vincent Price and Maya Angelou. There are well over 100 stars to walk. Expect men on the corner playing saxophones and Chuck Berry lyrics carved into the pavement. We checked in at the hip and fun Moonrise Hotel, serving gorgeous food with a party atmosphere and great views from the roof terrace.

The next morning, only 24 hours from Tulsa, I am willingly climbing into a claustrophobic egg shaped capsule and heading 190 meters up the Gateway Arch, St Louis. A monument to the expansion of the US westward. It feels like riding a rickety ferris wheel. Released from my pod at the top I could sense a distinct sway, and it took me a full two minutes to remove my hands from the walls and peer out of the windows, but when I did I noticed my legs were not made of jelly and the views were stupendous. 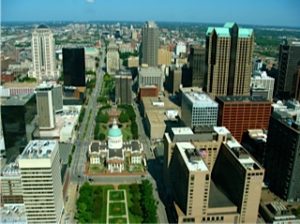 From St Louis it is pretty much essential to stop at Ted Drewes Frozen Custard where the queues start forming 30 minutes before opening.

Next up – Carthage via Springfield, Texas and New Mexico