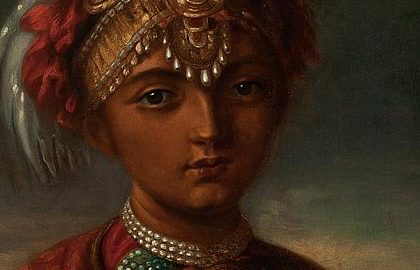 In this part of the world, very little is known of the Indian village: Kodagu (Coorg) and that such a place exists at the doorstep of a bustling metropolis, nestled between the Brahmigiri hills, hidden amongst a canopy of coffee, pepper and paddy plantations.

And virtually nothing is known of its lost princess- a story fit for a fairy tale or a hollywood blockbuster!

In the backdrop, like most other villages in India, the dictates of caste have tainted Coorg and its history is riddled with irony. And the common saga of the Indian caste divide between the upper caste & lower caste lives on. The two dominant communities being the Lingayats (non Brahmin considered to be the lower caste) and the Kodavas (Brahmins considered to be the upper caste).

Paradoxically, the Lingayats ruled Kodagu for over 230 years and Raja Veerarajendra was a royal descendent who took the throne after the passing of his father. He became the last King of Kodagu once growing pressure from British legions forced him to surrender, dethroned from his principality; and banished him and his family to the city of Benaras.

So began the epic journey of the Royal castaways and the birth of Coorg’s very own Pocahontas, in Benaras. 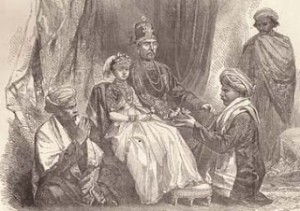 Chikka Veerarajendra - The Last King of Coorg with the princess Gowramma

She spent 11 years in Benaras, a forgotten existence, as was most of her life. Having lost her mother at birth, Princess Gowramma (Gowri) was brought up by her stepmother and lived in the shadows of what would once have been a royal lifestyle. Much of Gowri’s obscure life and insecure upbringing was a sad legacy she bore from her father and his wayward lifestyle- of alcohol and womanising.

Shrouded in doubt and conspiracy theories the story thereafter has the effects of a Greek tragedy. Stripped of his army, wealth and converted from Prince to pauper overnight, the Raja resorted to desperate measures to claim back some of his dues and also his pension.

The British turned a blind eye to the Raja, but could not evade the beauty, dignity and grace of Princess Gowramma as she blossomed into a lady. Queen Victoria took a great shine to her and quickly took her under her wing. Princess Gowri was the toast of all opulent royal dinner parties and the exotic princess was much saught after. Such was her staggering beauty, that Queen Victoria assigned the royal sculptor Baron Carlo Marochetti to sculpt a bust of Princess Gowri, on display now at Osborn House. 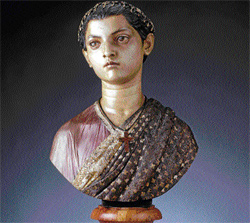 In the lure of getting the best suitor, she converted to Christianity, adopting Victoria as her baptism name, migrated to London and faded into obscurity after marrying an English officer, a widower. A nondescript end to a Cinderalla story.

She died young, and is buried in a quiet corner of Brompton Cemetery (1864), covered in green moss with a barely visible epitaph written by her best friend and Godmother Queen Victoria.

So much is unglorified. Much like the proud Coorg community today. They stand unique in customs, food, language, tradition and heritage, but yet so little is known of them around the world. And within India, Coorg’s once sprawling plantations are slowly becoming a pawn in the game of millionaires monopoly. Land in exchange of hotel chains and a conveyor belt of home stays.

And finally, to the cuisine. This is where I have my last word. I was thrilled to see so many Coorg/ Kodava restaurants when I googled it. Only to be disappointed- for alas I could not recognise any of the authentic dishes I have had the privilege of eating in many Coorg homes. I find rather some bizarre ones, Pork 99, Pork 65, Pork Manchurian, Chilli Chinese Pork…..yes pretty much all pork! The Kodavas have come a long way since the days of wild boar hunting, but this is an insult to the poor piggy chops eating community!

Whatever happened to the traditional Kodava cuisine? Pandhi curry or the Coorg styled pork curry should be celebrated. The spices are instense and all home roasted and ground. The vinegar or Kachumpuli is another trademark. Tomorrow, good old Pandhi curry will be served in a posh London Indian restaurant re-invented as vinegar braised lean pork with a pepper reduction.

I often ask myself, when it comes to Indian food, so little is known of its uncommercialised hidden kitchens and communities. And in a haste to dish up some exotic variation, we have hardly celebrated that basic dish in all its pomp and glory in the first place. Infact, there is no such thing as Indian food, it’s a myth, as every village, community, region has something unique of its own.

Will the real food from these hidden communities all fade into history, much like the story of Princess Gowri- India’s lost princess. Should we attempt to showcase these hidden cuisines to the world? Should it be a rose hidden behind a wall of a family home only to be experienced if invited into? Or should this culinary tradition, heritage and history be plated up and available to dinner tables across the globe?