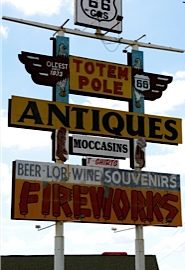 Continuing our traveller’s dream trip along Route 66 as she falls in love with New Mexico, and learns not to ignore warning signs.

Following on from Part I.

Across the Ozark Plateau Route 66 has some bizarre and beautiful scenery, Cuba with its Wagon Wheel motel and its mural project, Fanning with the worlds largest rocking chair, ancient gas stations, and rusting iron bridges crossing the river as you wind in and out of the Mark Twain National Forest.

It proved tricky to decide where to break our journey, and the road seemed to go on forever but pretty scenery is useless after dark, and the lights go off at 9pm precisely, dusk either doesn’t seem to happen here or happens very quickly. Driving due south for an hour after Springfield leads you to Eureka Springs AR, a pretty Victorian mountain village with a few nice spa hotels if you’re looking for a treat, however we carried on through Carthage for the Boots Motel, a Motor Court built in 1939 which currently has 5 rooms refurbished in period 40’s style. Conveniently there is a Drive-In Movie Screen just along the road. The classic white painted clapboard homes in Carthage with front lawns, and porches with swing seats left me unprepared for the devastation we found just a short distance away. 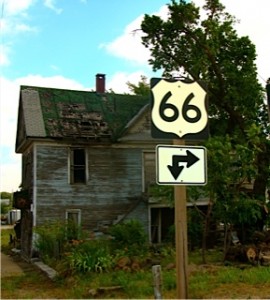 Kansas…… just the corner of it, for 30 miles of ghost towns, decaying gas stations, wooden houses either propped up on bricks or completely collapsed, closed shops and cafes, and wrecked cars and buses. This tiny little section of Route 66 looks like the set of a Western movie, complete with Cowboys, horses and tumbleweed.

Oklahoma O.K ! Where the wind comes sweepin’ down the plain. Although the landscape isn’t noticeably changed folklore has it that the Oklahoma soil was stained red by the blood of Indians slain in battle. The first town we reach is Quapaw, Indian Territory, we’re not in Kansas anymore.

I had been longing to travel the same road the Joad family took in John Steinbecks’ “The Grapes Of Wrath”. ‘Okies’ leaving the dust storms and the depression in the late 1930‘s, headed west to California in search of work. The next town, ironically named ‘Commerce’, appeared sparsely populated, homes and hamlets blown to pieces by hurricanes and tornados have been left that way. Bonnie and Clyde are remembered here. The most popular type of living accommodation appear to be trailers, and many homes that seem more permanent look like they used to be trailers. I wondered what kind of work is to be found nowadays in the vast openness outside the cities.

After Miami (pronounced My-am-uh) Old Route 66 became gravel beneath us and there was not a car or a person to be seen until we reached Afton with its’ restored gas station now a vintage vehicle museum. Foyil Totem Pole Park comes up next, and Route 66 has become the main road again. Slow down to see the Blue Whale in the lake at Catoosa, and pass places called Spunky Creek and Broken Arrow.

Plenty of diners to stop for lunch and drinks en route for a change. Tallys Cafe in Tulsa, an original 50’s diner serving the best Santa Fe spinach dip ever. Their recipe is a secret but I have the kind of face that makes people talk…… Spinach (large bag) and a bunch of chopped spring-onions sauteed in a little butter and drained, add a large handful of gruyere, feta, parmesan or mozzarella ~ whatever, it depends on the day ~ and a block of cream cheese, chopped tender artichoke heart, a little garlic, nutmeg, and black pepper. Mix everything together and throw into an oven proof dish, then bake until bubbling and golden, and serve with tortilla chips or toasted baguette…. 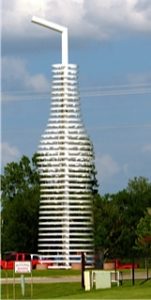 Next up is ‘Pops’ a new and buzzing cafe and gas station just down the road from the Red Barn, Arcadia. Pops’ giant neon soda bottle sculpture marks the entrance and is really rather brilliant.

When you arrive in a city you’ve never seen before, how you remember it depends so much on the weather and the mood you were in. Driving around searching for our rooms for the night, sprawling Oklahoma City did look oh so pretty but had a big black cloud hanging over it. At North Harvey Avenue 168 empty chairs illuminated the stormy evening and the heavy sky made sad sense.

To book rooms in the US last minute we used Expedia and TripAdvisor for reviews and ratings, or Hotwire for deals via our iphone or ipad. Sometimes we contacted the hotels directly if we couldn’t book online, sometimes we just walked in and asked for availability if we liked the look of the hotel or motel. Beware data roaming charges if you are on any network but T Mobile. 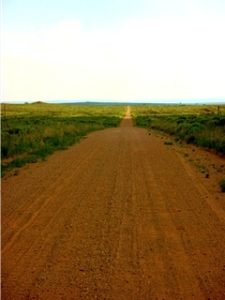 Route 66 through the green Texas panhandle is a gorgeous empty dirt road, crossing over the highway from time to time. It’s still playing the occasional dead end trick on you, and here or there depositing a steer or two in your path.

Call in at McLean for the Devils Rope Museum, a tribute to barbed wire. Why on earth stop here? Because it also houses a small, incredibly haunting photographic exhibition of the dust storms of the 1930’s.

We know the way to Amarillo, well we have a map at least, and along the empty road we pass a crooked water tower and just to prove that everything is bigger in Texas a 190 ft tall cross.

The Cadillac Ranch in Amarillo is the most perfect spot for some nostalgically teenage wanton vandalism. There are cans of spray paint dotted around waiting for you to graffiti a Cadillac to your hearts content, and I did. We motor on through Texas, call me Louise but it wasn’t a place I wanted to get caught. 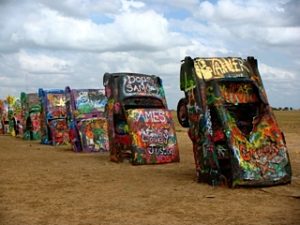 New Mexico…
The Land Of Enchantment, and indeed it is. I have left my heart and my hat there and I’ll return as soon as I can. If New Mexico had a sea coast I would never have been able to leave.

Warmly greeted in Tucumcari by Kevin and Nancy at The Blue Swallow, they could tell by the layers of dust on our car which alignment of Route 66 we had driven in on. Their classic neon lit motor court, built in 1939, is clean and very friendly, complete with vintage vehicles and larger than life murals of the characters from Disney/Pixars’ movie “Cars” and only $67 per room per night.

Santa Rosa, our first stop the next day, and the Route 66 Auto Museum. There are over thirty vintage vehicles on display, several are for sale, and when I finished wondering where I could get $50,000 dollars for a 1969 convertible, first generation, Camaro SS, I drove round the corner and threw myself into a clear blue, natural, bell shaped pool. 61 degrees suddenly feels so cold it takes your breath away, but it’s also pretty great when it’s 106 in the shade. The Blue Hole is popular with scuba divers, but I probably wouldn’t have stripped off and jumped in, twice, if I had noticed the orange eels beforehand. Detour from here off to Puerto De La Luna to see the original Spanish influence on New Mexico. I blinked and missed it, but I did see a real Cowboy roping his steer.

Taos Pueblo was our next destination, a 150 mile detour from the Santa Fe loop off 66, taking the scenic route, climbing to 8,000 feet through forest pines and the ski resort of Angel Fire. A drive one could never regret taking even though Taos Pueblo may not be open once you get there. I had read that if the Pueblo, a world heritage site, is closed the customs and rituals of the Navajo Indians who live there must be respected, and you should not enter. I regret to say we ignored this piece of advice, and we paid for it. 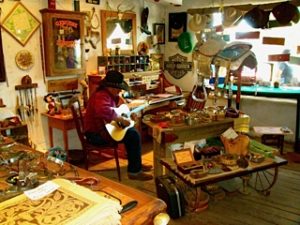 Before I explain myself I’ll take you shopping at photogenic Taos. The cool, bohemian home town of Julia Roberts, manages to blend the old and new so artfully that to some it might appear contrived. I was not surprised to hear its radio station KTAOS is completely solar powered, and there is an Earthship (a house made from earth filled rubber tyres and other recycled goods). Among the many beautifully stocked and reassuringly expensive adobe shops and art galleries there is one that is very special. Horse Feathers sells vintage gorgeousness from pre loved cowboy boots and turquoise belt buckles to rhinestone saddles, while the shopkeeper played Neil Young songs to me on his guitar…

Driving into towns or cities with the roof off the car means you get to smell and hear and feel those places by virtue of not being closeted inside an air-conditioned box. So for instance I can tell you that Las Vegas smells of freshly baked bread, I’m sure this is pumped into the air to mask the smell of all that sewage. Taos smells of cinnamon, and Flagstaff of pine. Taos Pueblo smells of history, old baked dusty clay and something bitter but as clean as melted snow. (for the record there are 22 Native American tribes in New Mexico and 19 Pueblos )

This is why you don’t pretend not to see the closed signs at Taos Pueblo:- We drove a short way along the dirt road past the cemetery and were greeted by an unfriendly wave from a lady resident. A dog barked nearby and tumbleweed blew violently and suddenly across the road. I had an irresistible urge to turn around and go back but the road was too narrow so we reversed exactly the same way we had come. From nowhere a pointed rock the size of a traffic cone, invisible to our reversing sensors and state of the art rearview camera, became wedged under our car and as the wheels span helplessly in the dust the weight of the car pressed down on the rock. After a while a young Navajo man stopped by in his Dodge and asked us if we had “Maybe got a little high centered ?” He came back in a moment with his dad, a shovel and a pickaxe, a rope and some more curious dogs, and after trying in vain to help us dig out the rock he and his father towed our Chevvy clear. I kissed both those lovely people as we left and they invited us to their Powwow that weekend. Sadly we didn’t make it as the injury to our beloved car proved terminal.

Next up – On to Santa Fe