I don’t think a dish exists today, such as the Biryani, that has been so painstakingly researched over the years. It has left culinary historians baffled and its myriad theories have intrigued countless food enthusiasts, many of whom claim to have decoded its past. If the Da Vinci Code has to be re-written, Dan Brown should certainly chose the Biryani as its focus this time around. And if I were to have my last supper, I certainly wish it was a good Biryani; and so my epitaph should proclaim- “died peacefully, with a bellyfull of Biryani”.

So where did it originate? There are so many theories, and they remain just that – “theories”. My bias is to go by recorded historical references, rather than theories, as the proof would then be in the pudding, instead of some bogus story. Unlike popular belief that the Mughals put their stamp on it when they invaded India, or that Taimur the Lame brought it in the 14th century, the Biryani has references dating back further, from the time Arab and Persian traders had links with India.

There exist today 26 different types of Biryani in India, all of which are original and authentic. No variations, no off-shoots, each one being the real thing. Today, every Muslim community in India stakes its claim to having “the pukka Biryani” version. But we’ll leave that to Dan Brown to decode.

What we have established is that having been brought in by Arab and Persian traders to India, the Biryani over the course of time has succumbed to the natural course of evolution, with a little tweak here and there, adapting to regional tastes, spices and flavours. But having said that, we owe a deep debt to the Muslim community in India, as it is they who introduced the wide gamut of Biryanis and its extension of Pulao to us.

So what’s all the fuss about? Evolving from a rustic one–pot concoction, where the cooks cooked rice, meat or fowl together to feed soldiers in a battle camp, the Biryani has certainly come a long way since the Mughal battlefields. Today, no dish comes close to the grandeur, taste, subtlety and refinement, as the Biryani. The staples of rice and meat are transformed into something ambrosial, absorbing the flavours of aromatic spices. India’s obsession with the Biryani even transcends into folklore and fables. In fact, the famous Dum Pukht restaurant dedicated to the art of cooking Biryanis over charcoal, using the Dum technique has an interesting anecdote and story for everything on its menu – from the king who was seduced by the scent of dum biryani prepared for his peasants, to the toothless Nawab who ordered a kebab that would melt in his mouth. 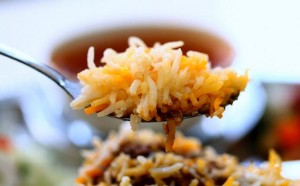 The rice should be light, puffy and grainy lightly coated with the fragrant spices.

Is it all down to technique & method? I often ask myself, if assimilating and cooking a Biryani is such a complex task, how do so many take-away restaurants have it on the menu? The answer is quite simple. They’re just variations, a quick-fix solution to mimic the true versions. The common mistake we make is to confuse a Pulao with a Biryani. While the former amalgamates all ingredients cooked together. For the Biryani, each staple is cooked or marinated separately & then combined in a process of layering, sealed (if done in a Dum style) and then left to cook so that the aromas & flavours waft into each layer slowly.

Sounds daunting? Well not quite so – I shied away from it for years for the very same reason, until I got my hands around some easy prepping techniques. I’d like to share one very easy and sumptuous one – The Date Biryani. Easy in preparing and assembling and realistic as I don’t want you to get put off by strange sounding ingredients that may be difficult to source. I make this Biryani often when I have vegetarians over for dinner. Its nutritious and the mild fragrant spices lend well to the sweetness of the dates put in. My kids love it!

Its also a good decoy recipe to ward off those guilty thoughts of over-indulgence we’ve all had during the holiday season! 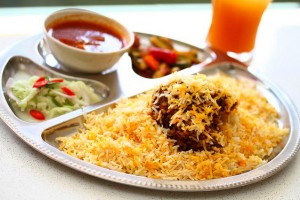 The staples of rice and meat are transformed into something ambrosial, absorbing the flavours of aromatic spices. Biryani is best accompanied with a raita, a yogurt based cold sauce.

1) Wash the rice and keep aside
2) Soak the saffron in the milk and keep aside
3) Saute onions until brown, add ginger garlic paste, spice powders, chillies and mint & coriander leaves. Toss for a few seconds
4) Add dates and cook for a few minutes. Add yogurt and cook until the dates are soft. Take off flame & keep aside
5) Boil water (6 cups) add 1 ½ teaspoon salt, put in whole spices and rice. Boil till rice is cooked, grains are separate, slightly underdone. The rice should NOT BE OVERCOOKED & MUSHY.
6) Fry extra onions, pistas and almonds & put on kitchen towel to drain oil. 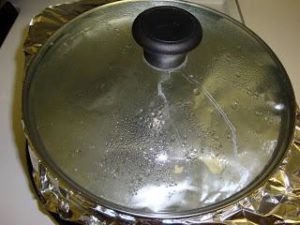 Dum Technique- by sealing the casserole dish with foil.

In a large casserole dish or a Chinese sand pot, put a layer of rice, then put a layer of the date mixture and sprinkle some fried onions and nuts over it. Repeat layers in the same sequence. Drizzle 2 tablespoons of butter and saffron milk over the top.

Seal with foil and cover tightly with lid. Heat in over 150 degrees for 30 minutes just before serving.

A Biryani is best accompanied with a raita or plain yogurt so that no other flavours over-power it.

Strangely, the best Biryani I have ever tasted was in Singapore, dished up by a road-side stall run by a 60 year old ex-butcher, now a household name in Singapore & probably world renowned for his signature Mutton Biryani which now has a large fan following. Ali Nachia Biryani Dam is a Biryani veteran & my mission one day is to deconstruct that awesome Biryani and put it on my menu!