Every now and then someone produces a piece of music which stirs the masses in a different sort of way from your classic No1 hit. Last year there was the ‘Walk off the Earth’ with their version of Gotye’s ‘Somebody that I used to know’ that launched this amazing band out from obscurity to international stardom. The end of last year and early 2013 saw a new people’s artist – a guitarist. The modern era favours solo artists with a good voice and mind blowing dance routines. The artist I am talking about is not a singer and I never saw him dance. You might have seen him in the clip as the guy who did the trance piece with his guitar and a strange hat on his head. It made several rounds on facebook at the beginning of last year and was shared all over the World. His name is Ewan Dobson and he is an award winning Canadian Artist. I had a chance to interview him for Berkshire Woman few weeks ago.

This is what he had to say.

E.D. – In the very beginning, I was enjoying the music of the children’s artist, Raffi. Then one day when I was eight years old, I saw the music video for “Kickstart My Heart” by Motley Crue, and was fascinated by the sound of the guitar. I immediately requested lessons and began to learn on an acoustic guitar. I learned the basic techniques of acoustic guitar for about two years before acquiring my first electric guitar. The music that I listened to became heavier and heavier, progressing from Motley Crue to Judas Priest then leading to Metallica and Megadeth. I continued with electric guitar up until the age of 15 when I discovered classical guitar. I took roughly six years of private classical guitar lessons with a teacher at the University of Toronto. Pursuing both electric and classical guitar over the next few years, I increased my knowledge of both technique and style.

B.W. – I’ve listened to your “Time2” countless times. I sort of had a ‘Time 2 fever’ for a while. It was forever playing in our house. Even our six year old loves it. Tell me how you created this piece of music? I am not a guitar expert but from what I hear it is a bit of a technical innovation.

B.W. – Are there any other pieces similar to it in technical sense?

E.D. – Yes, there are other pieces I play that use the same techniques of the right and left hand, but do not feature the delay pedal. For example: Time, Where Are You, and I Know Your Pain all feature similar techniques without delay pedal enhancement. A lot of people have suggested that I create more songs with the delay pedal, but it is all too easy to overuse the sound to the point where it loses its effectiveness.

B.W. – You’ve spent a lot of time remixing various cultural pieces, traditional music from various places. Have you travelled to do this? What is it all about and how many countries have you ‘remixed’ so far?

E.D. – Unfortunately, I was not able to travel to all of the countries whose traditional music I arranged – though it would be nice to be able to visit them all in the future. I had a series of books that featured traditional dances and melodies from various countries around the world, and I began to arrange multi-guitar part versions of the songs. What started off as recording one or two pieces for fun, ended up becoming an album of almost 30 tracks called “World Candies”. On this album, I play the rhythm, melody and harmony on three separately recorded guitar tracks. The result is a trio of three Ewans and in some cases, a quartet.

B.W. – Where are you ‘going’ for your next musical experiment? 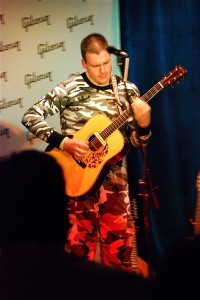 Sometimes he takes off the hat

E.D. – To date, I have four independently released albums and four albums released on the Candyrat Records label. My next step is to try and organize tours of various countries in Europe. I am presently in communication with an agent to try and make this happen.

B.W. – Which one is the real Ewan – the metal or the cultural?

B.W. – You have quite a following on the internet and in real life. From what I have researched people genuinely love your stuff. Do you get to meet a lot of people on tour?

E.D. – On the three main tours that I have done, meeting with members of the audience after the performance was part of every show. I always put time aside to greet the patrons of my music.

B.W. – You are on a tour at the moment. Where have you been and where are you going next?

E.D. – I have played a few places in New Jersey and my next show is in Philadelphia, PA. After this, I will be playing Boston MA, Dover NH, Providence RI, and New York City NY.

B.W. – What are the future plans? Another album? Another tour? Coming to Europe?

E.D. – I do not plan to record another album in the immediate future as I have recently released two albums in rapid succession. I am currently in contact with some booking agents to discuss future tour plans which have yet to be decided upon. It is quite likely that I will be playing in Europe in 2014.

B.W. – Anything else you wish to say?

E.D. – Be sure to check out my latest Candyrat double-album “Acoustic Metal”. It is one of the, if not the first, all acoustic guitar metal album. The first CD features Zack Bevelacqua enhancing my songs with fantastic drumming. The second CD has the same songs as the first CD without the drum tracks, as well as additional instrumental guitar compositions. This is so the listener can choose to either enjoy the super heavy version with drums or the instrumental heavy version of guitar only. Like my “World Candies” album, this disc also features multi-tracked guitar recording.

B.W. – Ewan, I have to ask! What’s with the lampshade/hat/item on the head?

E.D. – The “lamp shade” is actually a traditional Vietnamese hat. Most people believe the hat is Chinese. There is no deep or hidden meaning behind the lamp shade other than fun, experimental fashion design.