For the first time in 15 years, I sat down in my car the other day and broke down sobbing. On the side of a dirt road, surrounded by mountains. Waves of sadness, frustration, rage, and despair welling up. 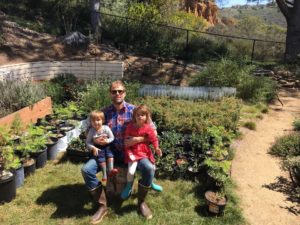 I’d spent the day planting and watering seedlings, which I’ve done for half a decade now. We have 300 acres on the north slope of Volcan Mountain, between Julian and Warner Springs. The property got hit by the Pines Fire in 2002, which killed two-thirds of the conifers. I grew up hiking in Cuyamaca, before the fires, and I got it in my mind to restore the conifer forest on the property. It took months to figure out what was what, heading up to the mountain once a week, taking pictures, coming home and trying to identify all the species, reading late into the night about botany, and forestry, and silviculture. I collected thousands of cones. I learned how to get seeds out of them and to stratify, germinate, and pot the seeds. I started growing seedlings in the backyard. I put together a working group with US Forest Service, US Fish and Wildlife, CALFIRE, and the US Natural Resource Conservation Service. We collected and sent 30 bushels of fresh cones up to the USFS nursery in Placerville, and I eventually got a thousand seedlings from those seeds.

I planted every which way I could, learning something new each time, year after year. The first year I planted in the open. The seedlings baked. Next in the shade. They baked. I learned to water every two or three weeks, which isn’t easy across 300 acres of steeply sloped terrain. The pocket gophers ate them from below. I caged the bottoms. Rabbits severed them at the base. I caged them above ground. Rodents climbed up and down into the cages and defoliated the needles. I caged the tops. The rodents ate the needles on all the branches that protruded from the cage, and the hardware cloth cages heated up in the sun and the metal killed all the branches and needles that were in contact with it.

And all the time, the relentless heat and dryness killed any seedling left without watering for more than two or three weeks. Winter rains are good, but there’s no snow-melt anymore, and a winter rain doesn’t help a seedling survive in October when there hasn’t been a drop of rain in 8 months (the second half of 2017 was the driest on record here). In spite of thousands of hours of thought, and worry, and work, and care, I’ve lost probably 650 out of the 700 seedlings I’ve raised from seed and planted with my own hands over the last 5 years.

That day, after a long, dirty, hot day of planting, I walked to one of my favorite spots, a ring of granite boulders sheltered by a huge, gnarled Canyon Live Oak. There, lying shattered and rotting in the middle of the ring, was half the 60 foot tall tree. The other half was still standing, but covered in the telltale, tiny D-shaped holes of Gold-spotted Oak Borer (GSOB), a beetle that gets into the phloem, xylem, and cambium of our native oaks and kills them rapidly. GSOB arrived in San Diego on firewood from southeast Arizona fifteen years ago and has been slowly advancing north, laying waste to our native oaks. It’s killed maybe 80,000 so far. I wandered around to a dozen nearby trees, all big, ancient oaks. The trunks of every one were spotted with GSOB holes. I stood there stunned. The whole millenia-old forest was dying, as far as the eye could see. I wandered back to my truck, numb.

I sat down in the driver’s seat, staring out the window. At the oaks, dying in mass. At the stately, hundred-foot-tall Bigcone Douglas Fir, towering above the oak canopy. Each Bigcone drops maybe two hundred to a thousand cones, depending on size, every three to five years. Each cone has around 100 viable seeds in it. Maybe 40,000 seeds on average per tree, every few years. Times a few hundred trees. An average of somewhere around a million seeds a year fall on our stretch of mountain. And yet there’s not more than a dozen saplings growing naturally on the entire property, 300 acres. I sat there thinking about what that meant, year after year, a million seeds dropped and maybe one or two survive, and those only on the dampest, darkest parts of the mountain. It meant the days of the Bigcone are done.

I sat thinking about those thousands of oaks on all those slopes, and ridges, and hills. Dying. I thought of the Shot Hole Borer, working its way up through our canyons, killing all San Diego’s Coast Live Oak, and willow, and sycamore, and cottonwood. I thought of the Bigcone pushing their way up through the oak canopy. Last of their kind. I thought of all my seedlings. The hundreds I’ve planted over the years and the hundreds filling my patio and yard. I’ve lost too many to count, but I can somehow remember the moment I first saw each one had dried out, or been pulled under by gophers, or stripped bare by rodents, or gnawed by rabbits, or trampled by cattle from the neighboring reservation. 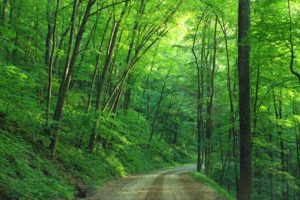 I’d thought about it all a thousand times. I’ve lain in bed so many nights trying to wrestle with it. I don’t know why, but that afternoon something in my mind buckled under the weight of it. I thought, ‘How do I tell my kids?’ and I started to cry. They’ve grown up with me storing seeds and acorns in the refrigerator, germinating seeds, potting seedlings, watering them, five hundred at any given time in the backyard, working in the greenhouses, unloading all my dusty tools and empty water bottles from the truck when I get back in the evening from the mountain. Their dad working in any spare moment on reforesting is all they’ve ever known. I thought of this photo we took a couple of years ago, sitting in front of all our hundreds of seedlings. So happy. How do I tell them that I don’t know what to do with the six hundred seedlings in the backyard? That if I keep them potted in the yard, they’ll get root-bound and slowly die, and if I try to outplant them on the mountain, they’ll die even faster? That there’s no place left in the world for these trees they’ve grown up with?

And then the question that was probably there the whole time, waiting to surface: How do I tell myself? I think of all the love I’ve put into saving that forest. All the years. All the thousands of hours. All the thought, and worry, and hope, and faith. How do I tell myself that it’s all gonna die? I’ve spent so long among those trees. It’s not like trees in a park you visit. I don’t go to a different trail or campground or mountain every week. I go to the same mountain, every time. I know every corner of those three hundred acres. I can see the whole forest when I close my eyes. Those trees are like friends to me. I know their peculiarities, their personalities. I can identify some of those trees by their acorns alone. It’s honestly too much. To know they’re all doomed. And if my forest is dying, the same thing is happening everywhere on earth. My mind leapt back 20 years to when I was doing fieldwork up in Kenai, Alaska. I remembered driving past hundreds of miles of conifers dying from Spruce Bark Beetle, which had exploded without the cold winters to keep its population in check. I must have blocked it out for twenty years. But it was right there, just below the surface of my consciousness, foreshadowing.

The sadness, the fear, the despair comes over me in waves when I think about it. The whole biosphere, sixty-six million years of adaptation and speciation, is dying. I took personal responsibility for repairing, conserving, stewarding my half-mile square of it, and it finally hit me–what I’d been wrestling with unconsciously for a long time–that I can’t save it. No amount of wisdom, or sacrifice, or heroism is going to change the outcome. It’s been wearing on me for years, but when you’re raised on Star Wars and unconditional positive regard, you think that no matter how long the odds, you’re somehow gonna pull off the impossible. It’s been years of working, day-in, day-out, against odds that were unimaginably long. Only, they weren’t long. They were impossible.

And at the crescendo of sobbing and loss, the saddest thought I’ve ever had came to me: I wish I didn’t know. What else can you say, when faced with a catastrophe of such vastness, with the unravelling of the entire fabric of life on earth? I mean, we need to fight to save what we can, but the web of life as we know it is done. All the beautiful things we saw as kids on the Discovery Channel. The forests I grew up in. The mountain lions, and the horned owls, and the scat and the tracks in the washes. We’re so early in this curve, and the changes that are already baked in will be so profound. I don’t think humans are headed for extinction. We’ll survive, though many of us will suffer and many die. But all this life with which we’ve shared the planet, much of it won’t make it. I wish I didn’t know. I wish I didn’t know those ancient trees dying up there on the mountain. I wish I’d never hiked through Cuyamaca before the fires. Wish I’d never looked beneath rocks for lizards in the canyons before the bulldozers came. Or heard the frogs singing.

Some of us have seen what’s coming. Some of us feel, deeply, the oneness of all life, feel its fabric fraying. On the first of April, 2019, just after 3 o’clock, some faith–some fantasy inside me–died, and I felt despair for the world I’ve known and loved. We will not save what was. The world, the systems, the interrelationships, the densely woven tapestry, the totality we were raised to love will collapse. My responsibility now is to my children–to all our children–and the world that will remain to them. To rescue as much as we can from that global conflagration, from the catastrophes of famine, and flood, and fire, and conflict, and exodus, and extinctions that await. To end our dependence on fossil fuels, immediately. To dramatically change our food production, our transportation, our land use. Our way of life. To defeat anyone and anything that opposes or hampers that work. If there were ever a truly holy war, this struggle–to save the whole of life from ourselves–is it. There can be no compromise. No increments. No quarter. There is nothing left, but to go forth–with the grief, and desperation, and granite-hard determination–and transform the world. Utterly. Immediately.

Dr. Cody Petterson is an anthropologist and environmental activist. He is president of the San Diego County Democrats for Environmental Action and serves on the boards of the San Diego River Conservancy and the Resource Conservation District of Greater San Diego. He lives with his wife and two children in La Jolla, California, where he enjoys his passion for native habitat conservation and restoration.